Privilege Has Its Privileges!

Sunlight is the best disinfectant

The ground is shifting, do you feel it? Honeoye has been lacking public information and scrutiny of town government.

Why do we have town government? Because we know what’s best for our community and we want to decide how our land should be used. New York State agrees and charters towns to write their own laws pertaining to local issues like zoning, planning, land use, public safety and health. This is called Home Rule.

Who makes local laws? In a sense we do. We elect a town board to act in our interest. They hold hearings to find out what the public thinks of a proposed law before it’s passed. Sounds democratic to me.

Once these local laws are enacted how are they upheld? Fairness and due process are built into enforcement mechanisms. These include a doctrine that you can’t play favorites, allowing one person to do something and not allowing others to do the same thing.

What is the Comprehensive/Master Plan that gets talked about? Turns out this is the guiding document for creating local zoning laws. A current committee is looking to rewrite this document.

Who writes the Comprehensive Plan? A group of people appointed by the town board who must follow rules set by New York State. The operative word here is “comprehensive” (complete; including all or nearly all elements or aspects of something: INCLUSIVE). People chosen for this committee need to take the time to find out what all the people think. To be legitimate and democratic, the will of a few can’t substitute for the wishes of all.

Alright, let’s see what the Comprehensive Plan says about people who have a business in their home. Zoning calls this a ”Home Occupation”.

From our 2004 Comprehensive Plan, Home Occupations need to be controlled. NYS has since adopted a new stricter law that limits the size of home based businesses. If a homeowner never received a permit under the old more liberal law, they will have to meet the newer, more stringent law requirements. The Town needs to update their building code to the new standards and enforce them.

Time for Some Head Scratching

What happens if someone breaks these laws? Imagine a homeowner wants to start a home business and the neighbors are dead set against it because it doesn’t fit in a residential area. A permit is applied for by the homeowner. Then the homeowner withdraws the application after a lot of resistance and says that a different business would be applied for. Well, what would happen if this homeowner went ahead and did what they wanted anyway - without a permit?

Surely someone from the town would stop this business. We hope so. Let’s say several years go by and the town makes him come back to the Zoning Board. The Zoning Board says No permit, No business. Yet this homeowner persists in operating without any permit and is still operating to this day. Turns out this is not a what if situation. It’s real.

Does the Town Supervisor know about this unlawful business? Yes. Why is nothing being done? When problem properties linger on and on, it’s necessary to look for systemic problems. Our officials are allowing scofflaws to thumb their nose at the rules and the laws. This creates a downward trend that’s hard to reverse. It feeds on itself. This town-wide lack of enforcement is making the Comprehensive Plan little more than a piece of paper used as a bookmark in the book of good intentions.

Why aren’t our officials enforcing our laws? Some officials at the town hall have said in public that “people should be able to do whatever they want with their property.” These officials have taken an oath to uphold the laws of the town, Those who ignore their oath or don’t take the oath seriously, should not be employed by the town and should step down. The attitude of ‘See No Violation, Say Nothing’ needs to end.

How long has this been going on? This property owner has been and is operating a 40 seat school, a retail firearms store, an outdoor firearms range and is manufacturing ammunition all in a residential neighborhood without the permits the Zoning Board has required since 2000 (18 years ago). This doesn’t fit any definition of a home business.

What does the zoning law have to say about these activities?None of these are allowed in the residential/recreational zoning district where this property is located. He would need to get a use variance for the school and shooting range according to the two zoning board decisions in 2000 and 2008.

How has this property owner gotten away with this for so long? He is an appointed official in town government and has held a seat on the planning board for the past 20 years.

Is it time for him to step down? That’s a question and a challenge for the Town Board. He has managed for 18 years, through his position, what others would not be allowed to do. Taking advantage of one's official position for personal gain is never acceptable.

Why didn’t the Code Officer shut him down? That’s a very good question which needs exploring further.

Will the Town Board act without hesitation to restore integrity and correct this blatant disregard of enforcement and violation of ethics? 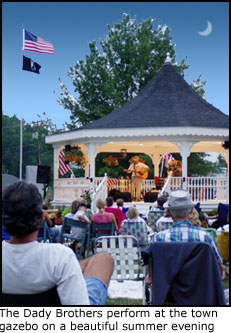